A Real Showstopper: Using a 3D Demo to Attract and Engage New Audiences

Since its beginning in 1952, Venco Venturo, LLC has grown to become one of the country’s largest hoist and service crane providers. Based in Cincinnati, OH, Venturo is a legacy company that manufactures, distributes, sells and upfits commercial work trucks, service cranes, service bodies and more.

In 1964, the original owner Art Collins formed the Truck Equipment & Body Distributors Association (TEBDA), which became the National Truck Equipment Association (NTEA.) Representing thousands of companies across the United States today, the NTEA serves the industry with many resources for fleet and truck building, advocacy and education.

NTEA is also the host for Work Truck Week, an annual event in Indianapolis, IN, which has evolved into the largest work truck and equipment trade show in the country.

As part of their exhibit at Work Truck Week, Venturo wanted to include some state-of-the-art interactive product demos (IPDs) for some of their newly designed work truck bodies and service cranes.

Venturo called upon DeanHouston+ to deliver the digital content to coincide with their other materials to round out their trade show presence, making for a truly interactive experience for their visitors at the show.

DeanHouston+ took the reins and developed the entire project from beginning to end. This included scheduling and executing photo shoots of the equipment, developing the digital IPDs and drafting all associated content.

In addition, the DeanHouston+ content and design teams created new Venturo business cards containing QR codes that scanned directly to a landing page featuring the IPDs, a product brochure and other brand information. To drive awareness for Venturo’s presence at NTEA and additional traffic to the landing page, social media content and Google ad campaigns were developed. 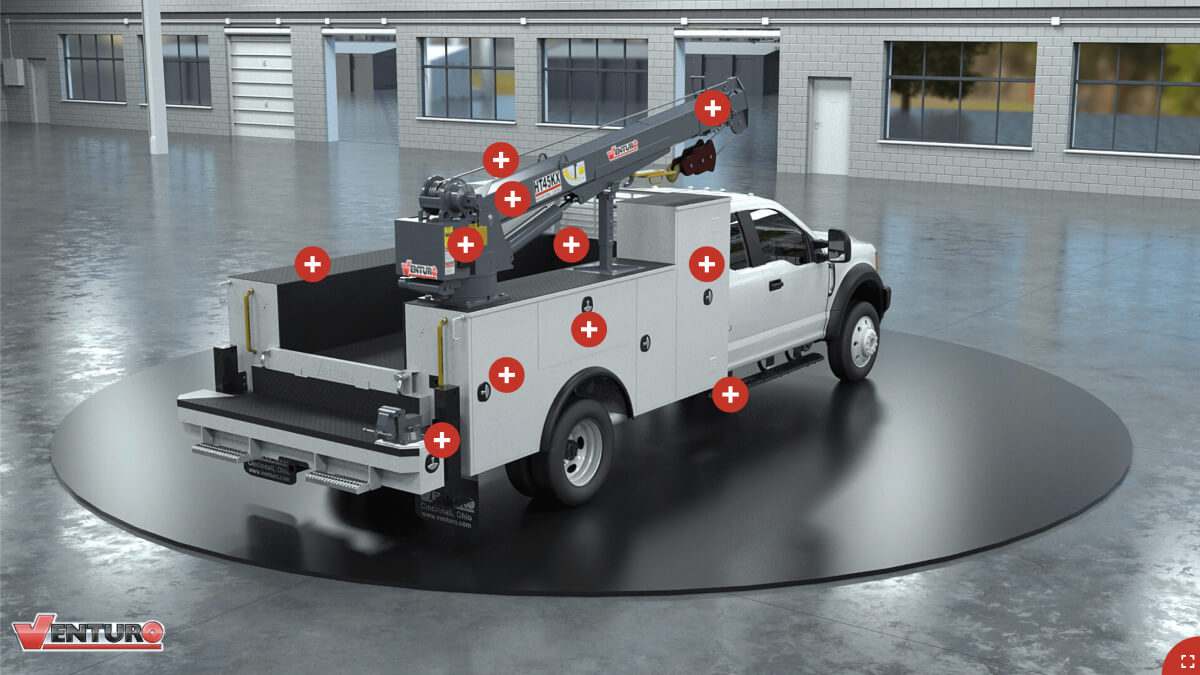 Multiple DeanHouston+ departments worked together from conception to launch, making the Venturo IPDs some of the fastest DeanHouston+ has ever produced—and they were a big hit at the show.

Many people visited and interacted with the IPDs, offering high praise in the process. The landing page is evergreen and has become useful sales collateral for Venturo’s staff. Because both the IPDs and landing page were designed with scalability in mind, plans are in place to further develop both to become an interactive configurator and sales tool.