There are a number of milestones that have helped DeanHouston grow from our humble beginnings in a small, two-room, second-story office space at 1208 Sycamore Street in Cincinnati into the four-jurisdiction, 70-plus person, Eternally Confident and Totally Fearless organization we are today. 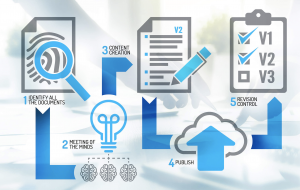 That year, we formally established a Technical Writing department. The need for such a service had been there for a few years, and so, in 2010, we made the decision to crank the velocity of our commitment to this area.

If ever after reading a set of assembly or installation instructions you find yourself more confused than before you opened the box to reveal the contents inside, then you understand this department’s significance. Companies that utilize professional technical writers are generally able to provide clarity with respect to how their products are installed and maintained. Since most of DeanHouston’s clients are leaders in their respective niche industries, we wanted to ensure that their technical manuals were the best in the business – hence why we created this department. Clear, precise writing not only provides context to the product and/or service, including its processes, but, moreover, it helps to ensure the operator uses the product or service safely and as intended. We have since renamed the department to more accurately express the group’s evolving, broadening array of services: Technical Communications.

In June 2018, we launched a new DH TechComm microsite and related marketing support material to further capitalize on what today represents a fast-growing business segment of DeanHouston. 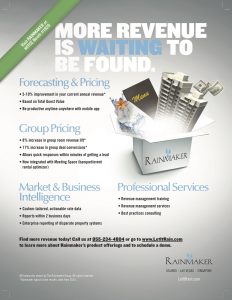 In 2011, we added Atlanta-based The Rainmaker Group to our roster of clients. The point to underscore about this account was that it, once again, validated a long-held DeanHouston philosophy; that is, if you do a great job for your client and they then accept a job with another company, the odds are good they’ll bring you along with them once they settle and gain traction within their new company. They know your capabilities, and they know they can trust you. Such was the case here.

A longtime (15 years) Scientific Games marketing client, roughly two years after accepting a Director of Marketing position with Rainmaker, would introduce us to Rainmaker executives and a rewarding business relationship.

Expansion was a recurring theme in 2012. We conquered new frontiers that year, none bigger than our foray into Southern California. We integrated the Grand Terrace, California-based Wilden Manufacturing in-house Creative Services Group, known as 20/20, into our company to form what is known today as DeanHouston West.

The group’s importance cannot be overstated. In addition to sourcing new business for DeanHouston in the western part of the country, they also play a pivotal role in managing and maintaining our relationship with PSG, a broad collection of independent, pump companies, and the linchpin for opening the DH West office.

Fifteen months later, we would ink a multiyear lease and move this group to its own facility, an approximately 3,500 square-foot office space in Ontario, California. In March 2018, DH West moved its Ontario office to a larger facility located in the nearby city of Rancho Cucamonga. The 4,000 square-foot office is situated near the foothills of the San Gabriel Mountains, about 40 miles east of downtown Los Angeles, and a short distance from the Ontario International Airport.

The new environment served to inspire this talented team and has been a catalyst for bringing in additional new clients with roots in the western portions of the U.S. The Los Angeles Economic Development Corporation, Anthony, Pillar Industries, Apergy, ST Media’s BD & HX Brands (recently acquired by Emerald Expositions Events, Inc.), and Mountain Secure Systems are among the new clients that have been added since the two moves.

In August 2012, we also began providing marketing support and packaging services for Prestone, FRAM Heavy-Duty, and FRAM Industrial Filtration, as well as limited support for the automotive group.

Sixty-eight percent revenue growth from 2008-2012 would earn DeanHouston a ranking of 3,120 on the Inc. 500/5000 list of America’s fastest growing privately held companies. Making this exclusive and prestigious list was the first of many awards to follow in rapid succession, including:

Office expansion was not isolated to the West Coast. Nearly simultaneous with the integration of the Wilden creative services team into DeanHouston, we established an office in the Chicagoland area (formed November 30, 2012).

DeanHouston has experienced exciting growth over the past eight years. During this period, revenues have tripled and several new clients (not including those mentioned previously) have been added, including Autolite, PDQ, Unified Brands, Source North America, Harris Products Group, PIVOTEK, SWEP, Lincoln Electric, Vantage (formerly GAL Group), Standex International, Glen Dimplex Thermal Solutions, Q Laboratories, Portable Solutions Group, CityDash, Illinois BIS, and Roto Rooter. These and other new clients, taken as a whole, require a marketing communications firm with an ever-widening array of expertise and capabilities, and our portfolio of services has expanded in lockstep to align with and meet this requirement.

In 2013, we did the impossible once again by opening an office in Shanghai, China. This Wholly Owned Foreign Enterprise (WOFE) allowed us to hire Chinese employees to locally serve our clients with operations in China, serving markets in Asia-Pacific.

Recall the overarching strategy Dale and Greg set forth in 2007 to transform DeanHouston from a practice tied principally to its owners to a robust and sustainable business enterprise.

During this same period:

This steady, impressive growth would necessitate a reexamination of our brand in 2016. By the end of summer, the decision was made to rebrand DeanHouston to reflect the strategic transformation outlined in 2007.

We created the brand architecture (DH as a seasoned navigator) and refreshed our messaging.

We created a new logo mark featuring clean, simple type and a plus sign. The “+” embodies the collective talent, wisdom, and diverse skills of a business that has grown well beyond its founders. It symbolizes what today is a dynamic enterprise that solves large, complex marketing challenges for many of the world’s leading business-to-business companies. And it also represents the company’s Whatever It Takes attitude in which every team member is expected to add value over and above what other companies are either unwilling or incapable of doing to meet and exceed a client’s needs and wants.

We also developed a new tagline to help accentuate a key philosophical and cultural underpinning that has defined our company since day one:

Had either of these entrepreneurial attributes not fueled us in the lead-up to 1988, we wouldn’t be here today. Certainly not as DeanHouston, anyway!

For those of you who believed in us in our start-up years, we sincerely thank you for your support and your confidence. It has meant the world to us; more than you’ll ever know.

For those of you who thought we were out of our minds and perhaps fearful we were making the wrong decision, fear no more…for the next 30 years are about to get even more interesting! And there’s no better time than now to jump in!