Fastballs, Forklifts and the ‘Worst Profession’ 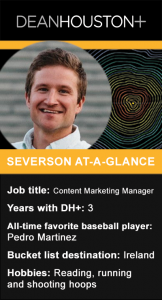 Long before Jesse Severson became the content marketing manager at DeanHouston+, he rode a hot streak through the state baseball playoffs his senior year. Coming in from the bullpen, he locked down three crucial games before being called upon to slam the door once more – when it mattered most.

For him, this was business as usual. But for most others, there was nothing usual about taking the mound clinging to a precious 4-2 lead in the last inning of the state championship game.

Fortunately, Severson didn’t let the moment get too big for him.

He struck out the first two batsmen he faced with alarming domination and found himself one out away from securing the first state title in Portland Christian High School’s storied history. He attacked the next hitter with a fastball on the inner half.

A slow roller up the third base side. Severson charged, fielded the ball cleanly and nabbed the runner at first for the final out. It’s unlikely the young Portland, Oregon, native was thinking too far ahead in that moment, but his humble execution on that big stage could’ve prophesized the professional future to come for the stoic scribe.

Fast forward to today, when we sat down with Severson to talk about his background, desert island items and the landscape of B2B content marketing.

And here’s the pitch…

DH+: Tell us about your background – where you grew up, schools you attended, why you became a writer, etc.
JS: I’m fascinated about if where you were born and raised helps mold your personality. I’m pretty laid back – some say, incorrectly, that I don’t care about anything. And that’s probably because I grew up on the West Coast, specifically Portland. My wife is a full-blooded Midwesterner from Illinois and my come-what-may attitude drives her absolutely insane.

I left Oregon my sophomore year of college because I was accepted into the journalism program at the University of Texas in Austin. Instead of becoming a Longhorn and enjoying one of the best campuses in the country, I started dating a girl back in Oregon and moved back home. (Yep, you guessed it, we broke up the week after I moved back.) I majored in History at Oregon State University and eventually moved out to Illinois – where everybody I meet says “Ory-gone.” 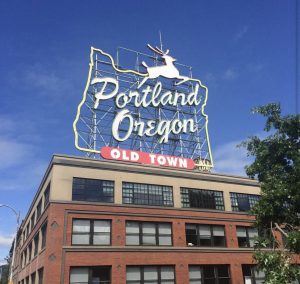 I would say I never “became” a writer because I always was a writer – how’s that for pretentious writer-speak?

DH+: You had quite the athletic career, with some impressive accolades in high school…
JS: Allow me to humbly brag about two things: I have a school record for 3-pointers made in a game (9, thank you for asking) and my baseball team won the state championship my senior year. I was my team’s closer, so my athletic career came to an end with a coveted state title. Yes, I quickly snuck the game ball into my back pocket before anybody realized it was gone.

DH+: What drew you to DH+ and what’s the best part(s) of working here?
JS: Quick aside: I spent 10 years in journalism and realized “Hey, people don’t buy newspapers anymore.” In fact, in Forbes’ list of Worst Professions, a newspaper reporter was literally last – behind lumberjack. Not great to see that.

So, I walked away from journalism, spent a year and a half driving a forklift and stocking shelves at Costco while getting my Master’s in marketing, and then DeanHouston+ decided to take a chance on me in 2019. I was thinking I’d get a few years under my belt and then bounce to the sexy world of B2C – Don Draper made it look so cool. And you know what happened? I started to love B2B and DeanHouston+. I love that I get to work with really talented people in different disciplines – design, web development, content, demand generation, etc. Collaboration is important for a writer because you feel like you’re building something together, instead of being locked in a dark room while you crank out content a few hundred words at a time.

DH+: Like most on the DH+ content team, you have a background in journalism. How do those skills apply and help with your creative process?
JS: Knowing what you don’t know but knowing how to find an answer is an important skill. A journalist and a copywriter have similar jobs: you’re a translator. You research and dive into whatever you’re writing about until you have an aha! moment and then find a way to translate in a clear, concise and interesting way.

DH+: Content creation is such a huge part of what we do. As a writer, where are you at with the current state of B2B content marketing and how do you see its value continue to rise in the B2B space?
JS: Here comes a rant, but you asked for it: there’s A LOT of bad B2B content out there. And I LOVE the art of writing, so it breaks my heart to see it. Every time a landing page says something like, “innovative solutions for your unique business needs” it makes me want to weep.

For example, if you went to an electronics store and asked the employee about a particular computer and they said, “it’s an innovative solution for your needs” you would think: “Okay, this person has no idea what they’re talking about. None, whatsoever.” 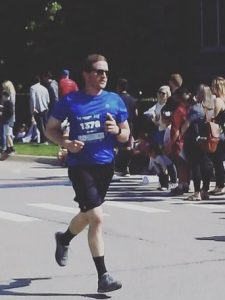 For whatever reason, when people write about business or technical products, they assume you’re supposed to include a bunch of jargon and buzzwords because…that’s what everybody else does…? Or because they don’t understand the product/service, maybe? Good marketing shouldn’t sound like marketing and shouldn’t sound like everybody else. I feel this strongly because I truly believe there’s tremendous value in good B2B content. There’s an audience out there actively looking to be informed and I think settling for unnecessary jargon is a wasted opportunity and a disservice to the reader.

DH+: What’s been the most fun/rewarding/interesting project you’ve handled at DH+ and what would you like to work more on in the future?
JS: One of our clients manufactures customized industrial conveyors and we did a How It’s Made video series, showing a project from beginning to end. It was a lot of work and planning, but I’m happy with how it turned out. I would love to continue to do more visually appealing, interactive projects that are partnerships across content, design and web development. Some clients are also letting us do some interesting things with video and social media.

Common theme: Some think a copywriter’s job is to fill a page with words, but a writer delivers the biggest impact by finding a way to use as few words as possible.

DH+: Personal and professional goals: what’s next?
JS: I have a novel (because every writer does) that I’ll work on getting self-published this year – so I can selfishly see my name on a book, because deep down every writer has an ego that loves seeing their own name in print. Professionally, I want to continue to find interesting ways to push B2B marketing – combining fresh ideas with ridding our content of buzzwords.

DH+: Your three desert island…
DH+/JS:
Albums/Keep in mind: I came of age during the early 2000s, so The Black Parade by My Chemical Romance, Underclass Hero by Sum 41 and Tha Carter III by Lil Wayne.
Movies/Big Lebowski (although I could probably act out the whole thing as a one-man play by now), GoodFellas and Shawshank Redemption.
Books/Some survival guidebook, then probably Hey Whipple, Squeeze This (I could come up with some awesome ads with all that free time) and Writing Tools: 55 Essential Strategies for Every Writer – those last two I read every year.

DH+: You’ve moved from the Pacific Northwest to the Midwest, yet you’re a Boston Red Sox fan. How did that fandom come about?
JS: One of the best things about childhood is imitating the batting stances of your favorite baseball players. Watching Red Sox shortstop Nomar Garciaparra was like catnip for a kid like me – with his weird, borderline OCD routine. 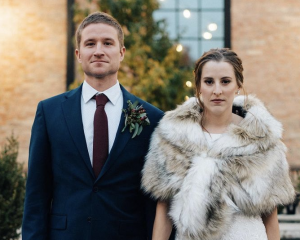 A buddy and I actually did the whole cross-country road trip thing one summer just so I could make it to Fenway Park – and it was everything I could have dreamed it would be. Now, four championships later, I’ve watched my beloved Red Sox basically turn into the Yankees. Ugh.

DH+: Word association. You know the drill here, give us the first thing that comes to mind.
DH+/JS:
Portland, Oregon/No matter how many times it makes me roll my eyes, it’ll always be a part of me.
Tavern-style pizza/A crime against humanity. I eat pizza with a pie-cut, the way God intended.
Oxford commas/There are times I think us ex-journalists need to lay down our swords and accept them.
Trot Nixon/There’s nothing better than remembering great role players (also, that’s World Champion Trot Nixon to you!)
Films written entirely by bots/An example of how a simple idea can turn into something extraordinary.