There was a time when the best way to experience virtual reality was to press your eyes against a small, portable headset and use a handheld controller to navigate a crimson, wireframe landscape. While this early attempt at VR gaming had too many people seeing red, the latest offerings span far beyond a limited, stationary vantage point.

Today, people can physically move through open spaces while fending off hordes of zombies, dodging gunfire on a tropical island, or testing their wits and reactions against rogue AI. Gone are the 32-bit pixelated lines of old-school VR setups, replaced with a smooth gaming experience complete with lines that blur reality.

Zero Latency is at the forefront of this VR revolution, providing the physical – as well as virtual – space for people to get away from reality 30 minutes at a time. The company, a DeanHouston+ client, specializes in free-roam virtual reality systems. Patrons typically wear a headset and other equipment as they move through open spaces. The equipment, specifically the headset, projects a virtual environment onto the physical space. 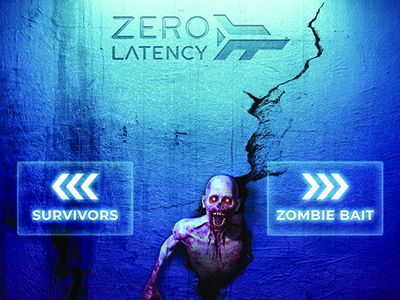 A little over a year ago, Reamsnyder’s most current VR experience came through the lens of her home system. Her husband, Chris, was more familiar with the typical commercial VR offerings, though they came with heavy equipment and sometimes tethered participants.

While in Las Vegas – their designated home base when traveling out west – for a hiking excursion, the couple sought something different for their nighttime entertainment. While exploring MGM Grand, they discovered Zero Latency.

“We were blown away,” she said. “Not only were the graphics and VR effects amazing, but we were able to roam freely around the arena while playing.”

The pair enjoyed the experience so much that they opened their own location (along with their business partner) in the Cincinnati area, adding to the company’s growing list of U.S. locations. Zero Latency, which debuted in Melbourne, Australia, in 2015, has more than 55 venues in more than 20 countries, including 14 in the United States.

While each location provides a grand VR experience, the Cincinnati office is one of two (Las Vegas the other) that has the latest Gen 3 technology at the helm. The latest technology includes the HTC VIVE Focus 3 headset, designed to deliver increased performance up to 16 times greater than traditional all-in-one headsets, Reamsnyder said. 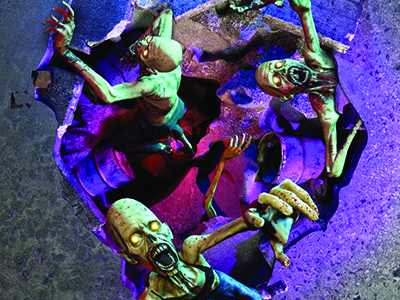 The headset also provides precise room-scale tracking and an all-in-one form factor, giving players a truly wireless VR experience. This is possible through the headset’s sensors, which include four tracking cameras, a G sensor, a proximity sensor and a gyroscope. These features also play a role in keeping motion sickness to a minimum.

“To date, we have yet to have anyone, including those who have preemptively told us they easily get sick, have to stop playing due to motion sickness,” she said.

Having the latest technology, such as the Focus 3 headset, allowed Reamsnyder to eliminate some of their older equipment, such as backpacks and wires. The Cincinnati office only needs the headset and a controller to give up to 8 players at a time the full Zero Latency VR experience in its 54 x 27-foot arena.

“Each and every player can move freely about in the arena throughout gameplay,” she said. “We’re able to immerse our players in mind-bending worlds that sound just as real as they look.”

So far, Zero Latency Cincinnati has six VR games available, which consist of Far Cry VR, Undead Arena VR, Sol Raiders, Singularity, Outbreak Origins and Engineerium. There are two additional games coming soon. The first, announced in September, is War Hammer 40K Space Marine, which will debut in early 2023. The second game, a popular brand, will arrive sometime in 2023, though Reamsnyder could not disclose the title just yet. 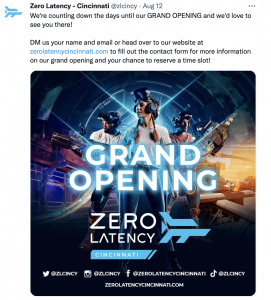 Players must be at least 12 years old to enter the arena. Reamsnyder said there isn’t a “typical” customer at Zero Latency as she’s seen all kinds of people (men, women, gamers, non-gamers, seniors, etc.) take part in these virtual adventures.

“Zero Latency is also a great place for large, corporate events,” she said. “With enough notice, we can accommodate any group size and time frame that is requested. All past events have been a huge success with 100% satisfaction.”

As VR technology continues to evolve, Reamsnyder expects Zero Latency to remain at the forefront. They’ll be assisted by DeanHouston+ as well, who helps them with graphics, social media and other marketing endeavors.

“The virtual world will continue to become more and more realistic,” she said. “Zero Latency is always on the cutting edge and looking for ways to continue to make our experience the best there is for our customers. This in turn will allow Zero Latency to remain the leader in VR.”

To learn more about Zero Latency or to book a time to play, visit zerolatencycincinnati.com.

Reach out to us to see how the DeanHouston+ team could help your business grow.